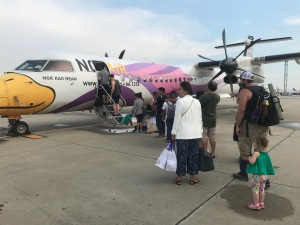 Our adventure to Ranong began with a flight in Nok Air. The short 1.5 hour flight was on a  small aircraft, a puddle jumper, to an equally small airport. We walked off the aircraft on to the runway, crossed it to the terminal and waited for our baggages. The terminal was quite nice, large open area with sofas and recliners, a large mural of one of the island beaches. Francesca was automatically drawn to the mural, which prompted a photo shoot as a Thai  lady couldn’t resist her cuteness. There was one baggage carousel that was directly connected to outside so the luggage could be easily unloaded and dispersed. Once we had claimed our belongs and were ready to go. We had not arranged transportation prior to our arrival and figured there would be some kind of taxi or tuktuk that would get us to where we needed to go. Luckily, there was a songthaew, a pickup truck with a cover bed and two rows of bench seats, awaiting anyone needing a ride into town. The driver was holding a sign, 50 Baht per person to Ranong. We told the driver where we were headed and hopped aboard with four other passengers. 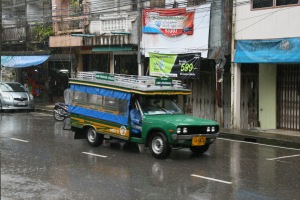 Before departing the driver mentally mapped out route and informed an expat that was riding with us that she would be the last dropped off. It was about a 30 minute ride to downtown Ranong. We were dropped off right in front of our guest house, Dahla House, and was greeted by Dahla herself.  She promptly checked us in, showed us where our room was on a map and pointed us in the direction of the 16  bungalows. Our cabin was next to a small play ground with a couple slides, swings and merry-go-around; each handmade work of welded art. Our cabin was simple; equipped with a bed, small fridge, table and chairs, private bath and a small patio. We opted for room with fan and no AC, which meant Francesca and I took several showers a day to cool down. We only were staying there for two days before moving to our house sit so we figured we could handle the heat. Besides we had planed on staying in Southeast Asia for a year so we might as well get use to it. Once night set in the temperature dropped and the rain cooled everything down, the fan was all we needed. 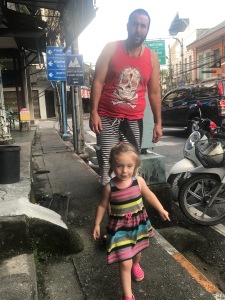 For dinner that evening we ventured the short distance to city center and scoped out what the neighborhood had to offer. Restaurants of all calibers with a variety of cuisine could be found within a few blocks. We decided to go for a traditional Thai street restaurant, we claimed one of the tables inside and looked around a bit dazed and confused, there was a man behind a counter with a variety of unknown dishes and a few ladies delivering plates to the customers that were seated. Were we suppose to order with the ladies or go and pick out the dishes with the man? After a few moments one of the workers motioned us over and pointed to the food, evidently we were to tell the man what we wanted and they would bring it over after it was platted. The man behind the counter spoke minimal English as do most of the Thai’s in the area but he could tell us if it was pork or chicken, spicy or not, he cut off a few pieces of meat cooked in a variety of style so we could sample and pick what we liked. Once our selections were made we waited at the table for our dishes to arrive. Our meal looked considerably different from the other diners in the restaurant, they had side dishes of veggies and other things we didn’t see at the counter but when you can’t speak the language you kind of have to go with it. It is all part of the experience and being a world traveler.

The next day we were a bit less adventurous and chose a spot that had some dishes written in English on a menu board in the window. The meal was about double the price as the dinner the night before but it was still about $7 total for three meals, even the more pricey places are cheap. Some time after lunch we were picked up by Camille and Franck, we were house sitting their home, business and cat for the next three months. They took us to their dive shop, The Smiling Seahorse, to show us around. The couple have lived in Ranong for twelve years running a business, which offers week long diving excursions of the coast of Thailand and Myanmar. They are expecting their second child mid July and needed someone to stay at their home, located on the backside of their dive shop, to ensure their cat would be feed and their property safe from theft and weather.

Ranong is infamous for its 8 months of rainy season and torrential down pours. Your home could easily flood if your tin roof gave way during a brutal windstorm. Their home was located in the middle section of a large building that ran the entire block. The dive shop was the entry to their home. We had to pass through the office and storage room to reach the living quarters. We entered the living room then passed through a sectioned off area that is the bedroom to reach the kitchen, bathroom and backyard. There is an unfinished upstairs that is used as a drying room when it rains outside, but they has plans on turning it into a few more rooms after the baby arrival. The kitchen area was traditional Thai, large open space with no AC, a wooden framed back wall with a small screened window, tin roof with sky lights covered in corrugated plastic. The kitchen was equipped with a two burner camping style stove and several western amenities: full size refrigerator and freezer, microwave, toaster oven, espresso machine, panini press, toaster, washing machine, dishwasher and of course a rice cooker.

While we checked out the house and went through the ‘what if check list,’ Francesca played with her new playmate, Clea. Since there was a toddler in the house there was a plethora of toys that would keep Francesca entertained for the months to come. After a few hours of conversing and making sure we had covered all the major points we decide to walk back to our bungalows and let them finish preparing for their trip. We would arrive back at the house in the morning around 10:30 to make sure everything was in order and get the keys. The next day we loaded up our packs and walked the short way to The Smiling Seahorse. Camille and Franck were doing some last minute errands and work around the office. So we watched Clea while they were finishing up. Once they were on the road we settled in, unpacked our belongs and got comfortable. This would be home for the next three months, we would spend our time exploring the area and taking a few short trips to a couple islands in the Andaman Sea.

Ranong isn’t a town where most tourist come for a long period of time, rather its visited when a visa run is needed. We were going to have time to investigate the nooks and crannies of this costal town. Discover things that would be overlooked on a short visa run visit. We were excited to have the time to take it all in, explore on our own timeline, not having to rush and live like a local.

Where in the world are the Bernhardt's...